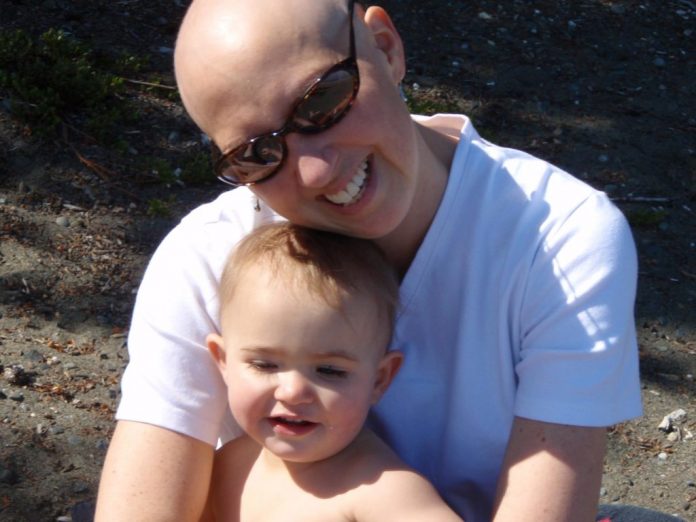 It will be 10 years this February. Ten years since being diagnosed with Breast Cancer. Despite the years I remember it like it was yesterday.

I found the lump myself.  I found it not because I was doing a self-exam, but because I had an itch. It was a fairly normal evening – granted, we had a crazy day, our son’s bedroom had flooded and we had spent the evening getting the kids settled into comfortable spots while the rooms dried out. We had headed to bed tired but, settled.  I was lying in bed with my husband and it seems pretty silly admitting it out loud, but to be perfectly honest, I scratched my chest and there was something not right. It was a more solid area. A lump if you brushed your hand softly over the area. I made my husband feel it. He could feel it but, he really did not think it was a big deal. It was nothing to worry about. I felt my fear unclench at his reassurance and went to sleep not knowing how wrong he was.

I went to the doctor the very next day anyway. I figured it was better to be sure. The doctor did not put my mind at ease and agreed that it was not something that should be there. I was scheduled for an ultra-sound the day after that. Again I did not get any reassurance. Instead the doctors kept escalating it. They did a needle biopsy 3 days later. I had the biopsy on a Friday and I had to wait for the results the following Monday. It was the longest weekend of my life.

I tried to be hopeful, but I knew. The doctor at the biopsy center had sent me home with a cancer bag. It was pink and black. It was full of brochures about cancer, a book, a video, a handmade hat.  I did not think everyone got a bag. The bag went into the back of my closet when I got home because it was scary.

I crawled into my closet a couple of times over the weekend and inspected the contents. I would cry, then crawl out but leave the bag there. I did not want to need the bag. I was still hoping that I was wrong.

I got the call from my physician Monday afternoon.  “I’m sorry”, he said.  “It was positive and invasive. I scheduled you to go see the surgeon on Wednesday.”  My mind tightened, my chest ached, and my adrenaline spiked. My world changed in that minute. 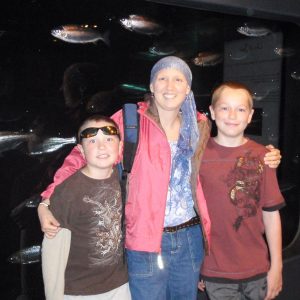 I was one of those crazy lucky ones that had it all AND I realized it. I felt like I could and did have everything. I had a great family, as well as a challenging but fulfilling career. At the point in my life I got the diagnosis I was on top of the world. I was in amazing shape – working out almost daily and eating right. I was running a multi-million dollar company and managing a family with my husband of 15 years. We had 2 boys that were nine and twelve.  They were involved in sports and outside activities and while they were pushing back about rules, they were super good kids that made us smile.  We also had a 10 month old little girl who was just on the verge of learning to walk. I really did have everything I ever wanted. I was not prepared to stop.

I discovered a lump in my breast on February 5th 2008.  It was removed in February 22nd of 2008. The cancer was very aggressive and a lumpectomy was not an option. There were already 3 tumors. I thought that I would take a break and do treatment and then get back to life. I was so very wrong.  My life became doctors, and therapies and sleep. Cancer is hard.  Treatment sucks. I had chemo for a year and a half. At thirty-eight I was thrust into chemical menopause by the chemotherapy.

I tried to continue with my routines but my life slowly unraveled and before the treatments were complete I was lost. My abilities to do the things I enjoyed faded.  I have a math degree and LOVE spreadsheets, but I could not make them work. My favorite place, our cabin, was no longer the peaceful happy spot it had been before chemo. It was too hard for me to function away from my home. Everything was so hard.  Just getting through a day and coping with the confusion took everything I had.  The part that was the hardest for me was my family. I went from being a high energy do everything mom to barely being able to sit at the dinner table with my family because the normal dinner table chaos was too much.

What is my point?

It is not to complain and whine.

Life is good again. That is the point.

It took a ton of work and I had to work really hard to find my place again. But I have. It is nearly 10 years since my diagnosis. I still have many of the side effects of chemo. I have a sketchy memory. I have accepted that my mind is not a steel trap.  I have family and friends that knows this and love me anyway.  I have learned to forgive myself for not remembering and at times enjoy that some things get to seem like new more than once.  Go figure! A plus from this “memory affliction” is that I have such deep understanding and empathy for those that are older, or highly stressed and struggling with their own cognition. It is a silver lining that I would have preferred to by-pass but I will take what I can get.

I struggle with a slew of other cancer and chemo related afflictions. Yet each year I make progress and get more and more comfortable with the person I am now. It has been hard letting go of the woman who was on top of the world to become one that can find joy. I constantly fall in the valleys and have to strain to find another peak.We humans are a resilient race. We endure and if we fight long enough and hard enough we learn to thrive. And life gets better. No matter how bad it becomes it can get better.  That is the biggest lesson from my cancer sucks journey.  Life is hard but life is good. If I am in a valley I will endure until I find that peak once again.  And when I am on the peak I will bask in the sun and be grateful for the day and the bright light and my heart will be full and I will be happy.

If you are on your own journey keep moving forward. There will be bad days but there will also be good ones. Get help. The battle is tough. If you don’t feel brave or strong that is ok. Sometimes it is enough to endure. Strong can come later. Just remember that there are more peaks to find and that you too will be able to bask in the glow at the top of a peak one of these days soon.

Brighter around the edges: My life after quitting drinking

Hiking For An Inspired Life

Yoga Poses For Lower Back Tension | With David Westlake

Discover the Healing Power of Crystals

It Gets Easier The More You Do It!

Hiking For An Inspired Life

Brighter around the edges: My life after quitting drinking