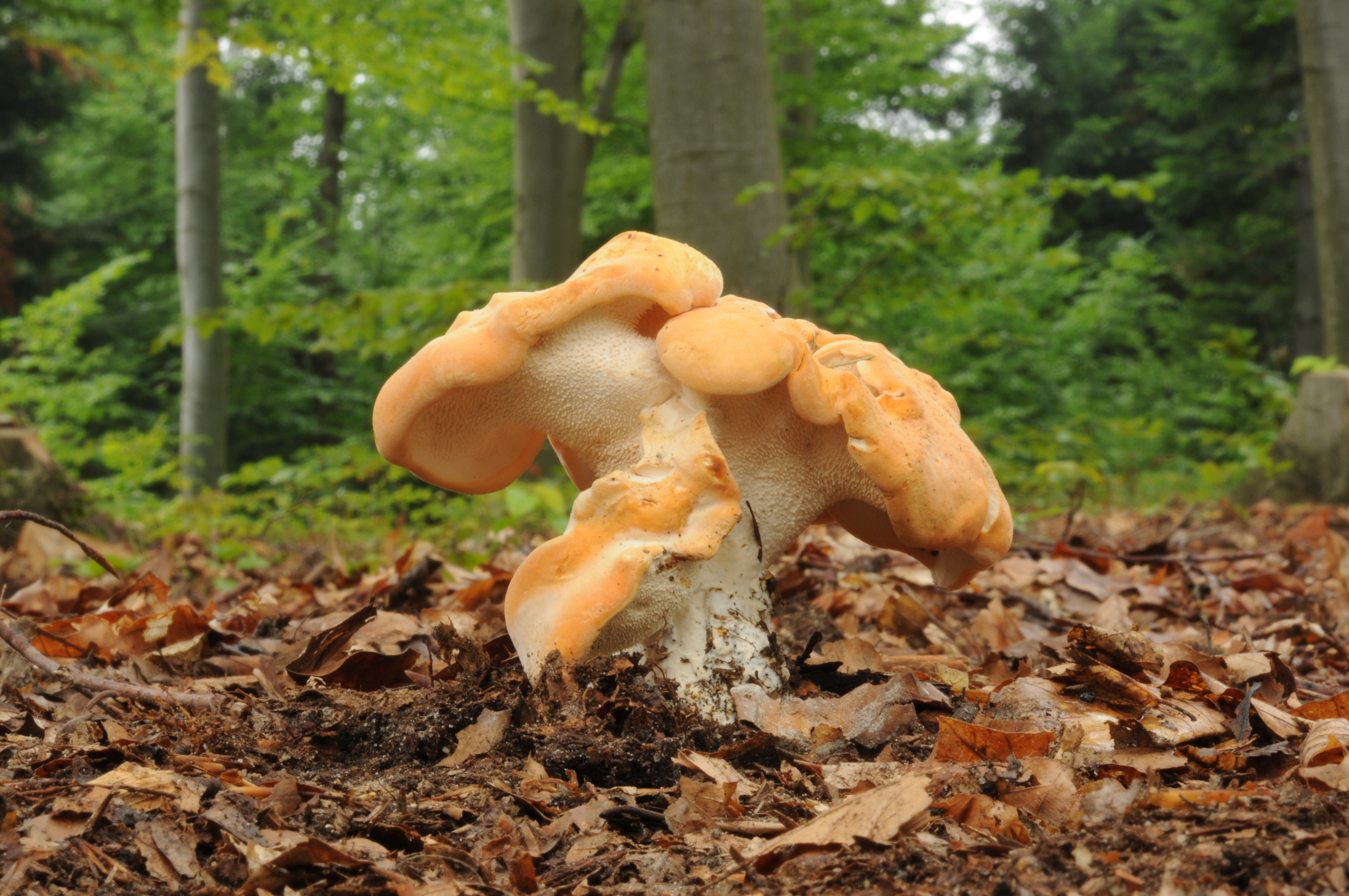 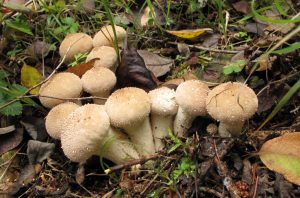 Puffballs are a great first wild mushroom to try because they are so easy to recognize and all species of puffballs in Alaska are edible! Slice one in half first to check that it is not actually a button Amanita mushroom– Amanita buttons will have gills and a stem hidden inside. Puffballs are totally white throughout like a marshmallow. If they are yellow or greenish inside, or even powdery brown, that means they are too old to be eaten. The middle part that turns into spores is called the gleba. Some puffballs are all gleba– perfectly round– and others have a short stalk, like Lycoperdon pyriforme, the Pear-shaped puffball. Some puffballs are smooth, others have bumps. The most striking puffball is Lycoperdon perlatum, the Gem-studded puffball, with pyramid shaped bumps that flake off if you scratch them. All are edible if white inside.

Like tofu, puffballs are excellent when fried. They also make a good accompaniment to fish or other meat. When trying any food for the first time, be it puffballs or tofu, taste just a little in case you have an allergic reaction.

Puffballs are decomposer fungi and can be found on rotting logs or grassy lawns. Do not gather puffballs or any wild food where pesticides have been sprayed. If you find a good patch with many mushrooms, the forager’s rule of thumb is to take one-third of the patch. Leave a third for other hunters and wildlife, leave a third for the fungus to regenerate.

Clean puffballs by quickly dipping in water and shaking dry. Cut them in half or thick slices. Heat a puddle of oil in a pan. Whisk an egg in a bowl and have another bowl ready with flour, salt, and pepper. Dip puffballs in egg, then flour mixture, then fry until golden brown. 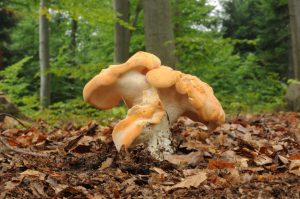 To someone from Washington or Oregon, the orange color and meaty texture of Hydnum repandum may invoke thoughts of chanterelles, but flip over a cap and you will be surprised to see a bristle of soft spines in lieu of forking veins! Like the chanterelle, the hedgehog mushroom is a choice edible. Unlike chanterelles, it is common in Alaska!

Hedgehog mushrooms are mycorrhizal with conifers, meaning that their mycelium is connected to the roots of spruce trees. The fungus mycelium gives dissolved minerals and nutrients to the tree in return for photosynthate sugars. Hedgehogs can be found in white spruce forests throughout Alaska. They range in color from orange-tan to light brown or whitish. All have spines on the underside.

The only other mushrooms in Alaska with a cap and stalk that have spines like the hedgehog are in the Sarcodon genus. They have large, dark brown, sometimes scaly caps. About eight species occur here, but only one is not too bitter to eat. Sarcodon imbricatus has very prominent black scales on the cap that look vaguely like feathers, giving it the common name “hawk’s wing”. This non-bitter species has a pale brown stalk, with no traces of green when bruised.

Both hawk’s wing and hedgehog mushrooms are very good grilled or broiled at high heat, and pair well with pork.

Sea salt and pepper, to taste

Pizza sauce of your choice

Preheat oven to 475º. Roast the poblano peppers in a sauté pan or open flame until skins blister. Cool, remove seeds, slice into strips.

Brush crusts with olive oil, season with garlic, a little red pepper, and salt & pepper. Spread a layer of pizza sauce, top with mushrooms and poblanos, cover with cheese. Bake for 10-14 minutes or until underside of pizza crust is browned.

Foraging Morel Mushrooms: Tips On How To Find, ​Identify And Prepare

Beginners Guide: Picking Puffball and Hedgehog Mushrooms in Alaska – A...

Are you Ready for Summer?

Bringing It Down:Working With Stress

Yoga Poses For Lower Back Tension | With David Westlake

What Is A Plant-Based Diet?